Thanks to SMOC I’m ready to roll for another 40 years! 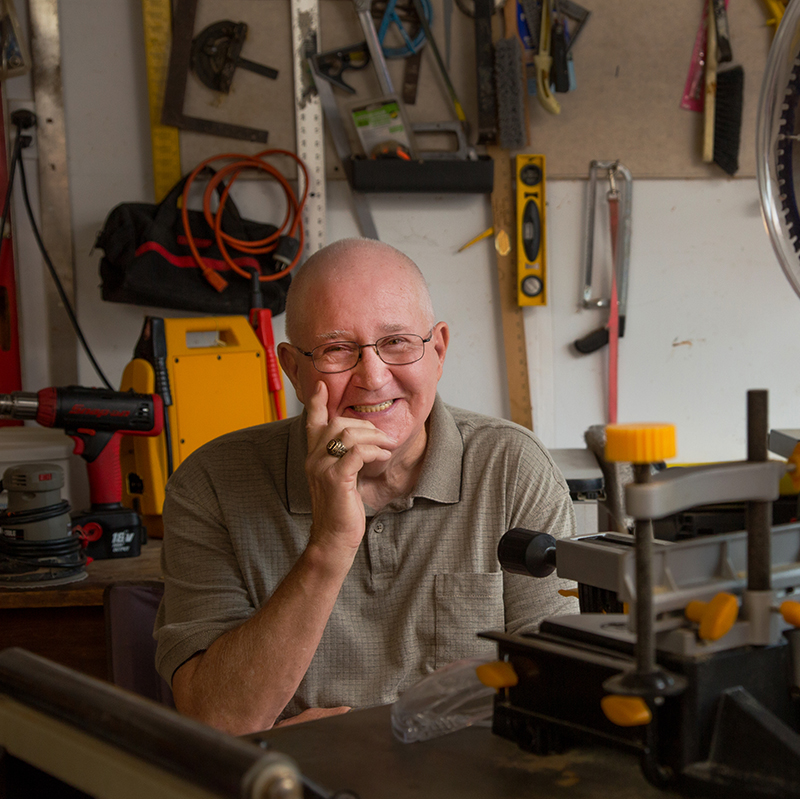 “Finally, I’ve been able to say YES to a lot of things, like going camping again and working in my workshop at home, that I couldn’t really do for a long time.”- SMOC Patient Ronald Weeks

I’ve had many surgeries with SMOC over the years—probably somewhere around 16 or 17 by now. I’ve been seen by just about all the doctors there, and I’ve probably recommended SMOC to 25 people who have also gone there for treatment. I wouldn’t even think about going anywhere else. They’re the best around! They actually rebuilt me. They are my miracle workers.

I wore my body out through many years as an elevator repair technician. I started working on elevators in 1959 and that’s what I did my whole life. I owned my own company for the last ten years of my career before retiring.

Just because you work on elevators doesn’t mean you don’t have to hustle. Every day, I was climbing up and down steps, running up 30 or 40 floors sometimes. Elevators have to get installed and repaired. I was jumping down three or four floors at a time, jumping in pits, loading trucks, doing extremely physical things that today, I tell people, just please don’t do. But in the old days, that was just part of the job.

Most of my problems started in my fifties. First, I had two surgeries on my back, preformed by SMOC. Dr. DiStasio took care of that and did an excellent job. My knee had also been bothering me for many years. But instead of replacing my knee at only 52 years old, Dr. DiStasio performed a corrective surgery on my knee. I got another 10 or 12 years out of that knee, before I had to have it replaced. In the process, I had my hip replaced, too.

Then, Dr. Bevilacqua gave me both new knees, two total knee replacements.. That guy is a miracle worker, too. He’s wonderful. He also did my shoulder, when I injured that.

But for years, I still had pain in my lower back. It actually went down into my hips, very low, from my back all the way down into the tailbone. At first, I thought I had a problem in my new hip. So I went to Dr. Bevilacqua and he looked at the X-rays and MRI. He said, “There’s nothing wrong with the hip, it looks brand new like when it was put in all those years ago.” This was great news, but they determined from the MRI that the problem had to be my back.

Since then, I’ve had five spinal surgeries with SMOC. First, I went to see Dr. Fox, and he put four new discs in my back, and fused it. Everything was going great, and I had an excellent experience with Dr. Fox. Unfortunately, later I developed an infection. So he preformed another surgery and things were working well again, for a while.

But then I started having trouble with my back again. I was going to Physical Therapy at SMOC, trying to work out the pain and build my strength. Still, I’ve been on Percocet for almost 2 years, just to manage the pain.

Then, my other miracle doctor, Dr. Tseng, took over the pain management. He really knew exactly where it was coming from. He pinned it down. We tried injections. Dr. Tseng told me, “I’ve got 32 different ways to treat you before we give up!” And he did.

We went through a lot of trials. He knew where the pain was…but we couldn’t get any kind of permanent fix on it. So, that’s when he suggested the Spinal Cord Stimulator.

Dr. Tseng put a temporary stimulator in, and I immediately started to see a positive difference. I think we had it in for a week, before we decided to go ahead and insert a permanent spinal cord stimulator, which Dr. Fox placed. So far, it’s doing great! I’ve seen a heck of a difference already. It’s a miracle, from what I had to what I have now. I use it 24 hours a day. I never turn it off.

Finally, I’ve been able to say YES to a lot of things, like going camping again and working in my workshop at home, that I couldn’t really do for a long time.

Now that Dr. Tseng has minimized the pain in my back, I’m ready to roll for another 40 years! I wouldn’t have a life without SMOC. I tell everybody that. That’s sincere.