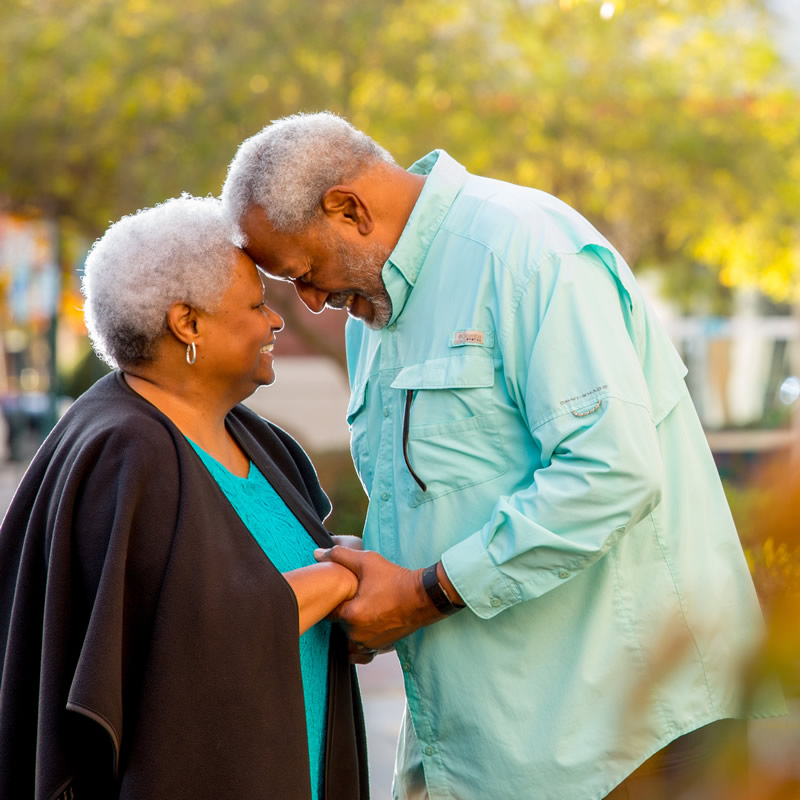 Our story could probably be named, A Tale of Three Knees, although there are 4 knees that are a part of this story!

My knee issues began while I was in the Army. I played intramural football; and as a soldier, ran about 5 miles a day in boots. That can’t be good for the joints. The pain carried on for years and as most people tend to do, I learned to live with a certain amount of pain. Once I retired and began golfing regularly, the pain began to take its toll. I would begin to limp noticeably after standing or walking a short while.

My wife’s knee issues began during adolescence when she suffered a knee injury. Her pain progressed over the years until she began receiving pain shots. That treatment went on for over 30 years during which time she was diagnosed with osteoarthritis, and was then a candidate for a total knee replacement.

That’s when we began the search for the best knee replacement specialist to perform Carolyn’s surgery. While seeking our second opinion, we were in the waiting room of a large Naval Hospital Orthopedic Clinic. The buzz among the other waiting patients in the place was, “Get Dr. Geoffrey Wright”. Well, we got him and we’re so glad we did!

Carolyn’s experience with Dr. Wright was nothing short of perfect. He was thorough, patient, and knowledgeable. On the day of surgery, Dr. Wright’s team gave Carolyn the support she needed both medically and spiritually as they prayed with her before surgery. That meant so much to us both.

After surgery when she was asked to describe her pain level, Carolyn’s response was “What pain level?” And in her words, “I wanted to kiss the guy!” Her elation was evidence of a job well done. In fact, the job was so well done that Dr. Wright replaced Carolyn’s other knee 4 years later with the same outcome.

I finally reached a point where my knee pain was really interfering with life. I had arthritis in my knee resulting in bone-on-bone contact. Seeing my wife so happy and pain free, I decided to go see Dr. Wright as well. We called the Naval Hospital Orthopedic Clinic where we had seen him previously and learned that he had retired from the Navy but joined a medical group in the local area. We tracked him down and made an appointment with him at SMOC. Bottom line: When you find an excellent doctor, you’ll follow him when possible!

Dr. Wright walked in for the appointment, smiled, and said “I know y’all!” Dr. Wright felt like a friend and we had a great conversation about my options. Once the surgery was scheduled, I had the same experience as Carolyn. Dr. Wright and his staff were kind, supportive and helpful during the entire process. I was even able to finish my rehabilitation early as my range of motion came back fast. I definitely credit that to Dr. Wright.

Since our total knee replacements, life has almost begun again. We are active with our grandkids and can do everything we used to enjoy including golf, walking, and water aerobics for Carolyn. Neither of us need walking canes.

As arthritis with bone-on-bone contact affects my left knee, I plan to have it replaced by Dr. Wright in the near future, which will make my wife and me “The Bionic Duo”! Dr. Wright specializes in knee replacements and there is absolutely no one we trust more than him and the team at SMOC.

If you need knee replacement, make sure you choose the WRIGHT specialist. We did and you should too. His surgical skills are phenomenal, and his care is superb.